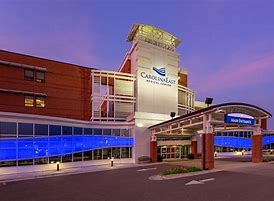 (New Bern, NC) – For the sixth year in a row, CarolinaEast Medical Center has been named one of the top best hospitals in the state by Business North Carolina magazine in their annual “Best Hospitals” issue released in March. The 2021 ranking lands CarolinaEast tied for sixth.

“To remain among the top ten hospitals out of over 130 in our state is a true honor for us,” said Ray Leggett, CarolinaEast President and CEO. “It is not, however, a surprise. The skill of our physicians and staff, the innovative technology and procedures offered here, combined with the culture of compassion and heart that we have built is truly something special. We are extremely proud of the reputation for quality we have built and to Business NC for recognizing that for the 6th consecutive year.”

Business NC introduced the “Best Hospitals” rankings in 2012 and includes the state’s adult acute care hospitals with at least 50 beds. The qualifying organizations are ranked based on performance in 25 metrics, which include outcomes in the areas such as patient satisfaction, infection rates, readmission rates and other publicly reported information from the Centers for Medicare and Medicaid Services (CMS). The editors also consider criteria from Blue Cross Blue Shield, U.S. News and World Report and safety ratings from The Leapfrog Group, which CarolinaEast Medical Center has received a Safety Grade ‘A’ for five consecutive times. Taking so much data into consideration makes the rankings particularly tight and smaller hospitals tend to come up short. At 350 beds, CarolinaEast is the smallest of the hospitals in the 10 highest-ranking on the list and the only hospital east of the Triangle.

The past year marked several milestones for CarolinaEast, as January 2020 saw the opening of the 80,000 square feet SECU Comprehensive Cancer Center at CarolinaEast Medical Center in a unique partnership with UNC Health. In addition, a new Diagnostic Center adjacent to the cancer center opened in March to facilitate convenient and efficient imaging services related to cancer prevention, treatment, and diagnosis.

2020 also introduced an unprecedented set of challenges in the form of a worldwide infectious disease pandemic. Frontline healthcare workers have risen to the challenge to continue to care for patients in their time of need, and the need has been plentiful. During fiscal year 2020, the 2,500 plus employees, nearly 250 physicians and over 400 volunteers cared for 13,778 inpatients, 117,112 outpatients, 54,548 emergency patients and saw 240,418 patients in the CarolinaEast physician offices located across four counties.

“In a year that most would rather forget, we do not take for granted the privilege we have to make a difference in someone’s life, every single day,” said Leggett. “I could not be more proud of the CarolinaEast team for continuously answering the call and maintaining the level of excellence they have 24/7/365 – no matter what.”